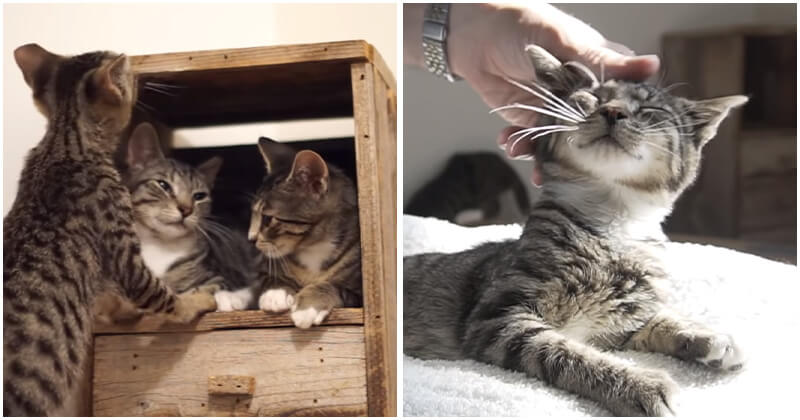 Have you ever heard of the term “kitten season”? It’s the period from early spring to late fall when cats tend to give birth the most, but unfortunately not many kittens would survive, especially the ones born on the streets.

The Flatbush Cats’ founder Will Zweigart and his TNR volunteers found this tabby litter right in the middle of kitten season in New York, when thousands of cats deliver newborns outside. As these four babies were still young enough to adapt to a brand new life, they decided to try socializing them and finding them all a loving furever home.

So, the team trapped the kittens and their mother and brought the whole family to the ASPCA. Of course, the mom was released back outside right after she recovered from spay surgery like other trapped adult cats in the project.

However, the rescuers accidentally made a big mistake during that project so one of the four kittens, Cardi, seized the opportunity and ran away. Will was devastated, but he didn’t want to give up on that boy. He continued to search for the missing cat every day.

As for the rest of the litter, Chai, Cinnamon and Nutmeg were taken to an amazing foster home where they are socialized, loved and spoiled. While Nutmeg was undoubtedly the spiciest one, Cinnamon was sweet and a bit shy.

Chai the runt was somehow the leader of the crew who loved to groom his brothers, but unfortunately he had some health issues that required immediate medical attention.

Under their care, they got milder and happier day by day.

Another good news was, after weeks of persistent searching, they finally found the last piece of the picture – Cardi. And to their relief, he was doing just fine. The cat was quite scared and stressed at first, but then he gradually managed to settle in like his brothers.

Once they were all ready for adoption, the rescuers embarked on finding them a new home, and they did it pretty creatively.

Please share this lovely story with your friends and family!