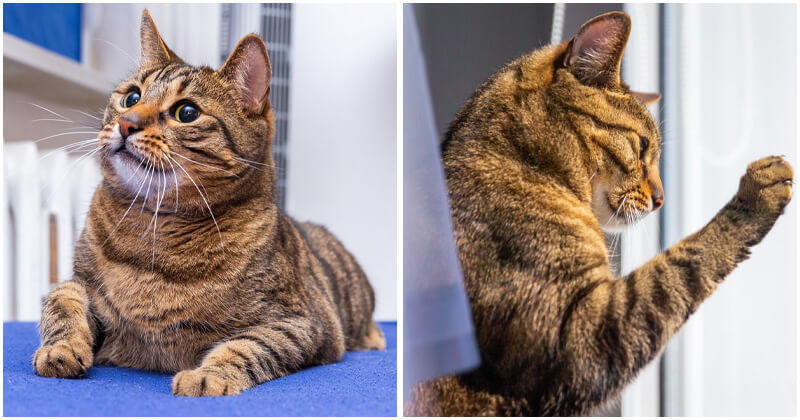 Cats are often said to be cold and aloof creatures, but actually it’s not true. Many cats love their humans wholeheartedly just like the most faithful dogs out there, they are just not so good at expressing their feelings. But once cats know how to reveal their true colors, they can melt anyone’s heart in the blink of an eye.

Meet Bobo, one of the most loving kitties in this world. The tabby cat was born in his owners’ home 11 years ago and has never left since then. As his daddy once said, that sweet cat is his “real furry friend”.

When Bobo was 2 years old, his owners welcomed a newborn kitten who was abandoned by her own mom into their family – another tabby named Nikita. They got along really well at first, but as Nikita grew up she became more fierce and Bobo also got jealous whenever their owners (especially the husband) played with Nikita, and they began to attack each other intensely. For the cats’ sake, the couple had no choice but to separate them when they were alone in the house.

Both Bobo and Nikita love their daddy wholeheartedly, but Bobo seems to be the more attached one. The cat never wants to leave the man’s side and he is always upset whenever his dad goes out, even only for a short while. During these empty hours, he often meows desperately while waiting for his daddy to come home to him.

And no, it’s not because he is hungry and needs someone to feed him, the poor boy only misses his dad.

Watch what happens when Bobo is left alone with food:

Needless to say, when the man comes back, Bobo is also the happiest one. He often eagerly approaches the door and just can’t wait to see his beloved dad again!

Let’s take a peek at the heartwarming scene (you can also catch a glimpse of the bubbly Nikita too):

Don’t worry about the cat not getting the attention or warm hug that he deserves because that moment was just simply cut from the video. Explaining the loud noise, the man also said that he had two locks and two keys that looked quite similar it’s confusing sometimes.

Isn’t Bobo endearing? Please share his story with your loved ones!

10 Feral Cats See A Woman As Their Mommy

Company In UK Creates Pet Portraits From Your Pet Photos