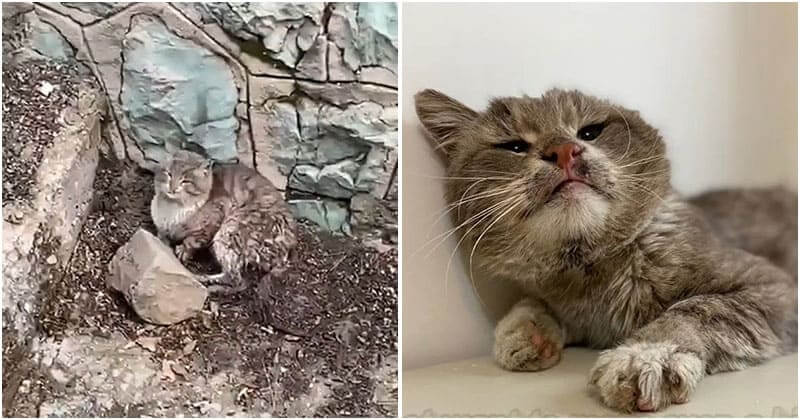 Surrie is a poor cat who was a victim of animal abuse. Thankfully, he was rescued just in time by volunteers at Save Meows. When they found him, they were shocked to witness what the poor animal had been through. He was helpless, painful, and afraid of people. He couldn’t move even a bit and seemed to leave his life for fate.

Looking at him, the rescuers instantly knew he was abused by cruel people. They talked to local residents to know what happened to him. They said that he was struck by highly explosive firecrackers. After hearing his story, the rescuers’ hearts were broken, and they couldn’t hold their tears. At that moment, they knew that they had to everything they could to save this poor soul.

They took him to the vet, where he was checked up and treated his health problems. X-rays showed that he had a crushed pelvis and a fractured femur, so he had to go under two major surgeries. The first surgery was successful, but Surrie was still weak and was not ready for the final pelvic surgery. For this reason, it was postponed until he could gain his strength.

A few days after the first surgery, he started showing obvious improvement. Around 2 months passed, Surrie was ready for his last surgery. Thankfully, it was successfully performed. The little boy’s changed after he met great people. He decided to fight for his life, and he finally bet all the odds to survive.

With the help and support of many loving people, Surrie came out victorious and learned to love again. He started to walk again and explore everything around him. He had been through bad things in the past, but now he is living happily with his loving people. We hope that his life will be full of joy and love.

Thanks for all of your support and love. Please share this post with your friends and family members to help save more animals in need.

Emaciated And Starving Cat Makes Miraculous Transformation After Being Rescued

Kitten Stuck In Narrow Pit For Months Finally Got Rescued