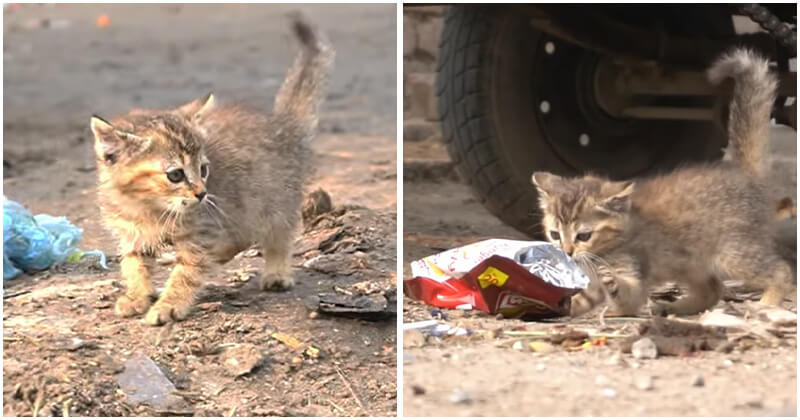 Life on the streets is never easy especially for the young animals who have no one to protect and guide them. That’s also the reason why many stray kittens just don’t survive. Without the love and care of their mothers, they can hardly make it.

Ashley the tabby kitten, however, was a lucky one. The poor little girl had a quite rocky start, she was dumped near the landfill site and was bullied by some cruel street boys in the neighborhood for no reason at all. She was all alone and helpless.

As they kept chasing her, the only thing she could do was running away, trying hard to hide and save herself.

Thankfully, a kind street sweeper had noticed Ashley’s pitiful situation and called a local rescue for help. The rescue was a bit tough as she didn’t let any of them approach her, she was still terrified of humans.

But then after a while, the baby feline gradually put her guard down and started playing like every other kid (well, she’s still a kid after all), so they seized the opportunity and captured that doubtful girl.

In the shelter, Ashley turned out to be a joyous and playful kitten who loved to make new friends and had fun with everything around her. She had adjusted well to her new VIP indoor life. The tiny cat also had a great appetite, she was clearly starving and no one knew for sure how long she had been separated from her mother.

Of course, once Ashley was strong and independent enough, they would help find her a loving forever home that she totally deserved. It’s safe to say that here dark days were officially over. From that life-changing moment on, nothing but sweetness was waiting for this charming gal!

Please share Ashley’s touching story with your loved ones!

Smart Kitty Faked A Limp To Get Into The House