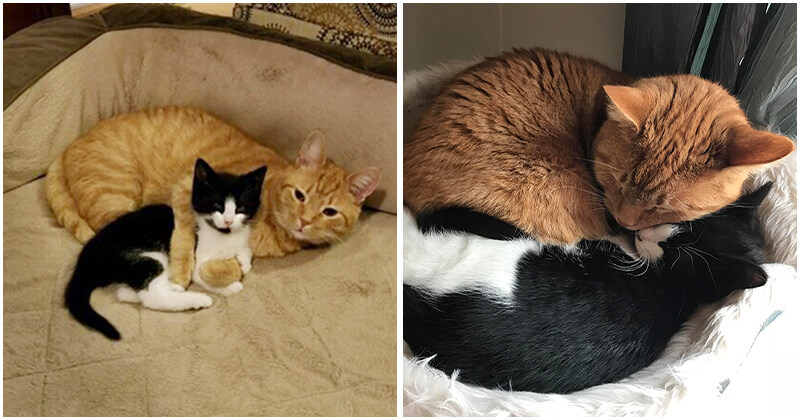 It’s no secret that cats don’t always get along really well with other felines, but this little cutie is truly exceptional. He loved his little brother right at their first meeting and even though his hooman only wanted to foster that street kitten, the cat decided to let him stay instead. This funny yet touching story was shared by the ginger tabby’s owner himself on Reddit. He came across that tuxedo kitty while driving on a busy road three years ago and since that place was pretty dangerous for a small stray like him, the kind man quickly decided to bring the baby cat home.

The man had the stray kitty scanned for microchip and even posted his photo on social media in the hope of finding his owner, but luck didn’t smile upon them. No one claimed that poor boy. It seemed like the cat was born on the streets or already abandoned. So, the kitten got to stay with him for a while. The man already had two dogs and one cat in his house back then so adopting the kitten wasn’t his initial idea, he only intended to temporarily foster the cat while looking for a new home for him.

The new habitat terrified the little boi at first, but then he gradually got used to it and even started making new friends. He tried to befriend everyone in the family, including the two big dogs. However, the one that he adored the most was the loving, protective orange cat who took good care of him. The two cats loved to cuddle together all the time (with the ginger cat being the big spoon of course), and the big boy even occupied the dog’s bed just for his tiny bro to be able to sleep and relax more comfortably. Isn’t it sweet? Eventually, because his cat refused to let the young kitten go, the man had no choice but to make his home the bicolor kitten’s furever home. It’s safe to say these little love bugs would have a spectacular life to share with each other! Please share this uplifting story to brighten up someone’s day!