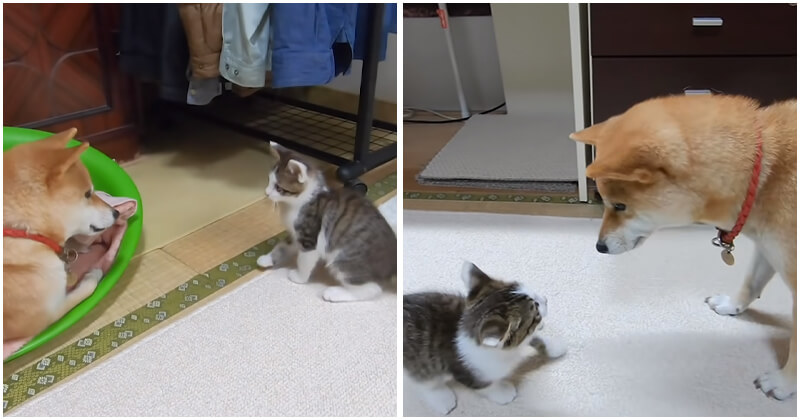 They often say that dogs and cats are mortal enemies and the pawblem often comes from the cats. Dogs are much bigger than cats and they are also trained to chase and hunt while playing, which are the main reasons why cats naturally consider dogs as a threat. But once they get to know each other, they can get along really well.

Towa the tabby kitten and Yato the Shiba Inu are an interesting example. Their first meeting wasn’t going on very smoothly, but anyone could see that the nice dog truly want to befriend that smol critter. However, the little Towa wasn’t so sure about it. As Yato tried hard to approach him, Towa tried hard to slide away. Yato was 5 years old and Towa was only a few months old back then.

However, the golden dog didn’t give up after being rejected, he was pretty persistent. As the kitten curiously discovered her surroundings, he became calmer and slowly accepted everything there, including the dog. Their bond started with a shy and gentle kiss.

Let’s take a peek at the lovely moment:

After they become more familiar with each other, Towa gradually returns to his playful self and always wants to trouble his big brother. Here is a hilarious moment when the mischievous cat challenges the dog to a fight, and the way he does it is just so weird and adorable! While Towa jumps around like crazy, Yato simply lays still and watches the cat in a very laid-back manner. Such a sweet gentle boi.

The funny thing is, when the dog finally stands up, our little Towa seems to lose all of his courage. As Yato constantly steps forward, he keeps getting back and then eventually runs away! Seriously, can this cat be any funnier?

If you find this unlike duo endearing as we do, please share their story with your loved ones!

Loving Cat Misses His Owner Whenever He Goes Out