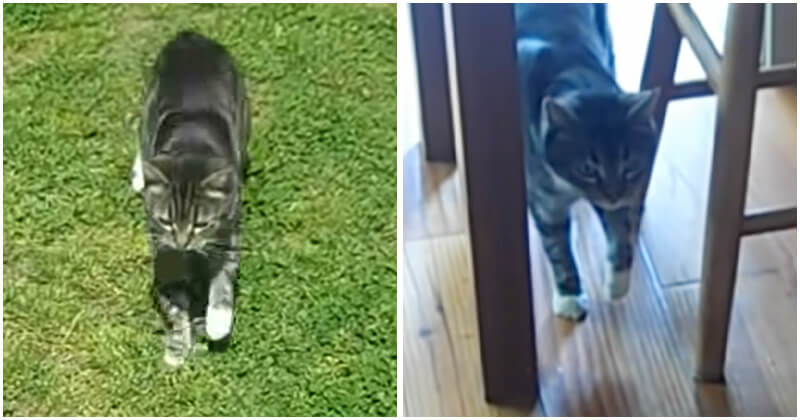 Cats are smart creatures who could go above and beyond just to get what they want, food and attention for example. Sometimes they can be impressively creative it’s really hard to ignore their wise moves. Yes, with a cat by our side, it’s safe to say our life will never be boring.

Meet Snuggles, a real master when it comes to the art of faking it! The tabby cat had a habit of pretending her paw was hurt to achieve what she aimed at, and it happened every day. Even though Snuggles’ parents were way too familiar with her trick, they could hardly say no to that drama queen since the cat’s acting skills were so on point.

The clever feline often limped her way into and around the house pathetically. And when she thought no one was looking or when she just wanted to take a break from the act once in a while, her paw suddenly “healed” like a miracle and her family couldn’t help burst out laughing at the scene. To be honest, that girl was a genius!

Behind those peals of laughter, however, was a touching story. Snuggles’ was taken in by a local animal shelter and was adopted out twice, but then she was returned shortly afterward and her second owner even declawed her since she just kept attacking people for no reason at all. That aggressive kitty even had a Vicious Animal sticker at the vet and she wouldn’t be examined unless she was sedated. So, one of the directors at the shelter (also the woman who filmed this funny scene) and her husband decided to take the cat home to see what they could do for her.

Despite all those violent acts, they still loved the cat unconditionally and they all knew that she loved them too. She guarded their house, kept the bears and deers away, and occasionally brought them ice, birds, snakes… as a present to express her love and gratitude.

Snuggles passed away 3 years ago, but she would be remembered forever.

Injured Feral Cat Gets Rescued After Being Stuck In Between Branches

Feral Kittens Transform Into Sweet Kitties After Being Rescued And Socialized

Aussie Artist Sneaks Her Three Adorable Cats Into Her Paintings