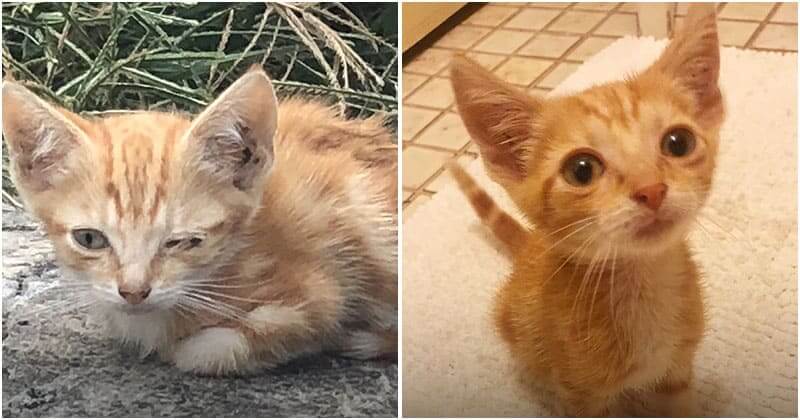 Melissa and her husband were going outside when they spotted a tiny kitten behind a fence. Knowing that the kitten was in need of help, they got closer to check up. When they looked at him, they were shocked to see his situation. He was so sick and just had one eye. Due to being living on the streets for many days, he was malnourished and weak. The couple thought that he was abandoned, so they decided to help him.

They used a jacket to grab him, put him into their car, and drove straight to a vet clinic. After checking him, the vet said that his eye was infected and was closed shut. His body was covered in fleas and dirt. He was also dehydrated, and had a 50/50 chance of survival. The couple wanted to give the kitten a second chance at life, so they decided to keep him and took him home.

Melissa had never had a cat before, but she and her husband still tried their best to learn everything and help the kitten survive. Sadly, despite all their effort and dedicated care, the kitten didn’t show any sign of recovery. After a few days, he got worse and didn’t eat or drink anything. They went back to the vet, where he got proper medical treatment and care.

After giving him all the necessary things, they took him home, fed him, and gave him some medication. The couple spent most of their time caring for him. They checked on him all the time to make sure that he was doing well. Sometimes, they were scared that he would not win this fight. But thankfully, their effort was finally paid off.

A few months later, he ate a lot better and could start to stand. He slowly gained his health and started to show off his sweet personality. He now becomes a sweet and playful kitten who loves to play and explore everything around him. He also loves hugging and snuggling with his beloved parents. He also has a beautiful named Pizza.

Looking at Pizza now, we can’t believe he used to be a sick kitten who was abandoned behind a fence. After all things happened to him in the past, he now has a loving home and great parents. We are sure that they love him so much and will do everything they can to make him happy and healthy.

20 Fluffy Friends Who Love Their Humans More Than Anything

Fall In Love With The Biggest Cat Breeds In The World