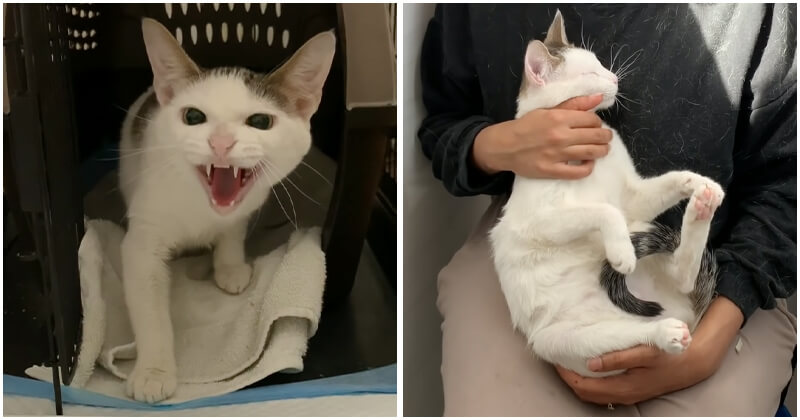 Sometimes when we come to an animal shelter and see a cat or a dog hiding in the back of their cage, we tend to assume that they just don’t like humans. But that’s not always the truth. It’s possible that they did like or even love humans, but then we let them down. Such poor souls need plenty of love and patience, but once they learn to open up their hearts again, they could be the sweetest and most attached ones.

This cat was abandoned in a carrier near the trash with an open can of food and a few slices of meat by her side. After being dumped cruelly in such a harsh place, the confused girl was shaking in terror. Thankfully, a Flatbush Cats volunteer spotted and rescue her. They named the cat Sima, which means “treasure” in Hebrew.

Sima was really scared and stressed as her foster volunteers took her in. That cautious girl was definitely starving but she was just too alert to accept their food. The poor feline was even aggressive at first, and they could totally understand the reasons.

But then, they gradually managed to calm her nerves after a few days. As they expected, Sima turned out to be one of the most affectionate kitties they had ever met. The endearing cat loved cuddling and nuzzling and if she could, she would just lie on their laps furever.

The only pawblem was she didn’t eat as much as she should. However, after several weeks of antibiotics and deworming meds, the cat started to regain her appetite and energy. Of course, her trust in humans was restored, too, and her rescuers couldn’t be any prouder of their incredible Sima. As they said, it was their honor to help this little girl.

Sima later had no trouble finding herself a loving forever home with a caring big sister who resembled her, and they adored each other a lot. The strong girl was well on her way to living a spectacular life.

Please share Sima’s lovely story with your friends and family!

20+ Weird Cats Who Are Shamed Online For Their Unbelievable Acts

Poor Kittens Wait For Their Mother Who Will Never Come Back