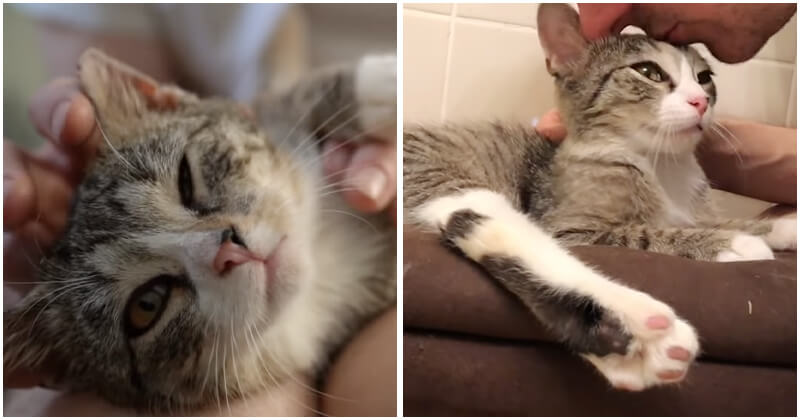 Not every rescue has a happy outcome, but a not-so-happy outcome doesn’t mean the love and efforts of the rescuers are totally wasted. To them, every being matters, and all the lives they save are meaningful in their own way.

Back in 2018, when Will Zweigart had just founded the Flatbush Cats not so long ago, he met a very special colony of cats. One of them was Liam, a feral tabby who had some serious health issues that need to be treated as soon as possible. Since Liam was already a few months old, he wasn’t suitable to be socialized anymore. The indoor life really stressed him out and after he fully recovered, Will released him back outside with other cats in their TNP project.

Only a few days later, Will came across Liam’s brother Lionel – another feral tabby kitten who seemed to be an impressively tough guy. Even though newcomers weren’t welcomed at all, the fierce boy still fought his way into the colony and gained himself a spot there.

Just like other feral cats who already passed the window for socialization, Will only intended to trap and neuter Lionel, but there was something in his eyes that melted the rescuer’s heart. Despite the experience with his brother Liam, Will decided to take a chance on Lionel and see what they could do for this cat.

With the help of Mani – a resident kitty who loved to talk to their foster cats and comfort them, Lionel quickly opened up his heart. It turned out there was a sweet, gentle, cuddly boy under that rough exterior. Maybe he was only tough outside because he needed to be to survive in such harsh conditions.

“Even though we were busy with lots of rescues, fostering and TNR work, seeing Lionel was the highlight of every day,” Will said. “We taught him how to relax, how to enjoy the good life. And most importantly, we loved him like one of our own.”

Once Lionel was happy and healthy again, as usual, it’s time to say goodbye. Will had found Lionel an amazing forever home with a caring mom and a loving cat sister, where he could get a wonderful life that he absolutely deserved.

“I’ve said lots of goodbyes, this was easily the hardest,” Will continued.

However, the love bug’s “wonderful life” did not last long. Only one month later, Lionel was diagnosed with FIP, which was considered untreatable back then. He passed away within a few days. Needless to say, the sudden tragic broke his rescuer’s heart.

“In our lowest moments it felt like all the time and effort we put into Lionel for his new life was just… lost. But of course that’s not true. His life mattered,” Will said. “Even if I had known how things would end, I wouldn’t have done anything differently.”

Although Lionel was gone, he still continued to inspire Will and his volunteers to keep on and even try harder at what they were doing. He would live in their heart forever.

The Flatbush Cats officially became a 501(c)(3) organization shortly afterward and haven’t stopped helping animals in need since then.

Make sure to prepare some tissues before you watch this:

Please share Lionel’s touching story with your loved ones!

22 Times Cats Made No Sense

Momma Cat Steals Her Kitten Back From Owner