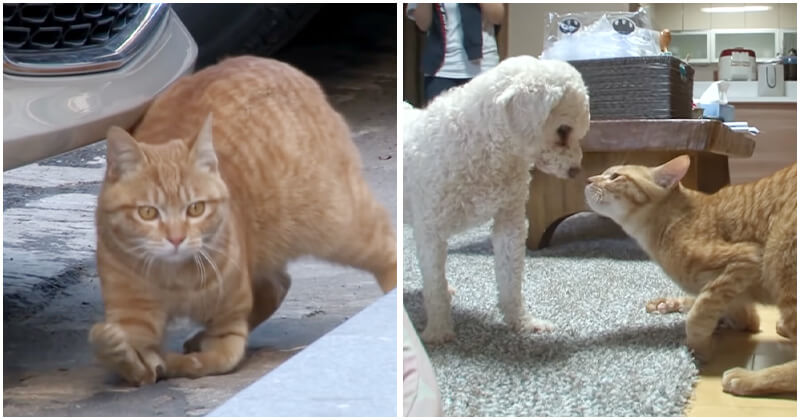 It’s always a tough life out there for stray animals, but it’s even harder for the imperfect ones. Life is a battlefield in those luckless creatures’ eyes. They have to fend for themselves every day, ceaselessly fight every day, just to survive.

So when this ginger tabby showed up with two disabled font legs, he immediately gained the sympathy of many residents nearby. Since he had to crawl all the time, both of his elbows were injured badly and they just couldn’t help pitying that brave little boy. They didn’t even understand why he was still alive.

Some residents took turns feeding the poor cat. He was called by many different names, and one of them was Gina.

Gina wasn’t very trusting at first, but over time, he gradually learned to open his heart. The scared, doubtful tabby turned out to be the sweetest cat in the neighborhood. He loved to be petted and he never forgot to come up to say hi whenever he spotted a familiar face. His charm was undeniable.

After people heard about his story, Gina rapidly went viral and finally got the help that he desperately needed. A quick visit to the vet revealed that his disability was congenital and sadly there’s nothing much they could do to fix it, but the good news was they promised to find him a suitable forever home soon.

While waiting for a loving family, the lively boy was temporarily taken in by an amazing foster mom – famous rapper Cheetah. It didn’t take long for the bubbly boy to adjust to his new indoor life. Initially he was quite shy, but after a few days, he already made himself comfortable on her comfy big bed and joyfully played with her other cats.

However, Gina’s happy time with Cheetah didn’t last long as a kind woman had decided to take care of this adorable forever. Gina moved to his new family shortly afterward, where he met Jeonbok – a white poodle who only had one ear left. They shared the same pain, but they were no longer alone. They would always have each other for the rest of their lives.

Let’s take a look at this endearing boy:

Please share Gina’s moving story with your loved ones!

Tiny Kitten Gets Rescued And Becomes An Adorable Kitten